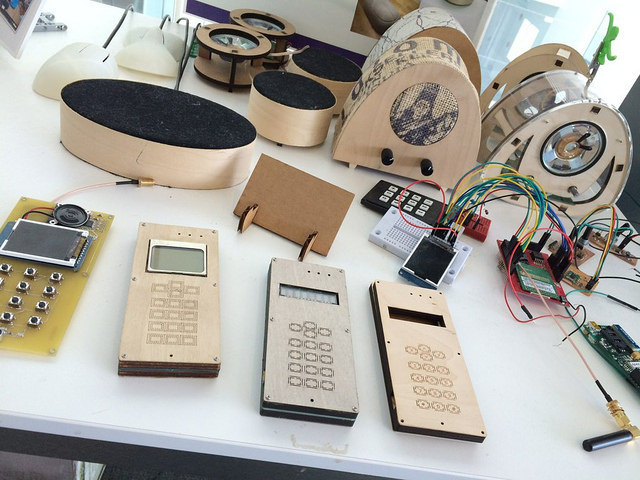 Last week a fellow IG member and I went to the Scratch Conference at MIT Media Lab. Scratch is a visual programming language developed by folks in the Lifelong Kindergarten Group at MIT and the Graduate School of Education at Harvard. The goal of the project is to help kids (and adults) transform themselves from “consumers of stuff” to “makers of stuff.” (Sound familiar?)

What impressed us about the conference is that it wasn’t only focused on technology, but on the social aspects of engaging with technology. The Media Lab has four principles that guide their techno-social-creative process: PROJECTS, PEERS, PASSION, and PLAY.

Makers don’t just talk about ideas. They make stuff. So PROJECTS are the physical manifestations of making. We participated in two project-oriented workshops:

Both workshops were scaled well and effective. Something that stood out to us was how the participants, who are educators from around the globe, interacted with each other. We helped each other troubleshoot and explore. All of us seemed comfortable with rapid trial and error. Which leads to the second principle – Peers.

In the keynotes, there was a lot of emphasis put on the role of peers when we are learning to program or make things. In the keynote on Day 2, Elyse Eidman-Aadahl https://twitter.com/ElyseEA of the National Writing Project said something that hit home. Now, her project is to transform “readers” in to “readers who write” but you can see the connection to transforming consumers to makers. Elyse pointed out that hour-long workshops have their place because they introduce people to writing. But to become a writer, one needs to engage with a community over time. They need to share their work. They need to get and give feedback. They need to mentor and be mentored. Something to think about as we look at our programming at the makerspace. How do we nurture our community so that more Ithacans can go through this transformation?

One thing we think about at IG and in tech overall is how to foster more diversity and inclusion in our community. One way to help more kids and adults learn technology is to offer experiences that enable them to tie technology – which is new and foreign to them – to something that they are already passionate and knowledgable about. Then the technology becomes less of a scary thing that newbies can’t do and more of a new tool for expressing ourselves. This passion principle is held by Harvey Mudd College where they offer joint majors that allow people to integrate a field they are passionate about with CS. It seems to be pretty effective with women filling over ½ of their CS student slots.

There’s a lot of talk about PLAY in the creativity space. At MIT, they make an interesting distinction between PLAYGROUND play and PLAYPEN play. The playground is a social environment where we interact with people and explore our decision making processes. In the PLAYPEN, our activity is more constrained. We don’t have the freedom to reach outside of ourselves. So when we are designing playful environments, it’s important to keep this distinction in mind.

The last session we went to at the conference was a session hosted by women who created the FAMILY CREATIVE LEARNING https://twitter.com/ricarose guide and GUERILLA POPup MAKERSPACEhttps://twitter.com/GuerrillaMakers. Both projects integrate all 4 Ps of the Media Lab. Here’s a secret they shared that we really love, “The aesthetic of these things is that it should feel like a family gathering. We always start with food.”

We welcome your insights on the 4 Ps or other principles that have captured your imagination. Share them with us in the comments or on our facebook or twitter streams.

Last week, Ithaca Generator makerspace (IG) partnered with Xraise, the outreach program at the Cornell Laboratory for Accelerator-based Sciences and Education, to host a week-long GERLS Camp for middle school girls. GERLS is an acronym developed by the program’s leaders Lora Hine, director of outreach at Xraise, and Claire Fox, education coordinator at IG. The acronym stands for “Girl Engineers Really Love Science!”

The camp had 11 girls participate from a number of area schools in Tompkins County. Additionally, several female mentors* from Cornell University, Ithaca College, and downtown institutions worked with the girls throughout the week.

THE FACTS ON WOMEN IN STEM

According to a 2012 Girls Scouts report titled, “Generation STEM,” women are not well represented in engineering, computing, and physics with only 20% of bachelor degrees in these areas earned by women and 26% of women with STEM degrees pursuing careers in STEM.

The report provides evidence on why these numbers are so low. While interest in STEM among high school girls is high, these same girls don’t necessarily want careers in STEM. They want jobs in which they can be creative, solve problems, work collaboratively, and make the world better. And the way that STEM is taught in many high schools now, it’s hard for girls to see that connection.

Another problem is that many girls don’t have STEM role models. When we asked one of the mentors at GERLS camp, computer scientist Jennifer Westling, why she thought there aren’t many women in STEM, she responded, “As a girl, I never knew any women engineers or scientists. As a result, I just didn’t envision myself in those roles.”

WHY IS IT IMPORTANT?

Research coming out of the Center for Collective Intelligence at MIT finds that there is a positive correlation between the number of women on a team and how smart the team is. So it’s important that women have opportunities to not only get in to these teams but to make sure these places are designed so that women can succeed once they are in.

GERLS Camp mentor Jenn Colt adds this insight, “We’re not going to solve the important problems facing us today if we have half the population convinced that they aren’t smart enough to take on these challenges. We don’t need everyone to be a scientist but we need everyone believing that they have important contributions to make and their gender doesn’t determine the value of their ideas.”

WHAT TO DO ABOUT IT

In a 2014 interview with Maria Klawe, the president of Harvey Mudd College–a place where they’ve worked to get over half of the students in computer science to be women–Dr. Klawe lays out her insights on how to engage more women in STEM. ‘First, the intro courses need to be compelling, tying STEM to real world problem solving and creativity. Second is building confidence in the community and encouraging students to ask each other for help. And finally, it’s important to offer joint majors where women can integrate subjects they feel confident in with STEM.’

In line with Dr. Klawe’s insights, GERLS Camp was filled with real, hands-on activities, lots of encouragement to work collaboratively and to help each other, and the girls were allowed to bring their own interests into their projects. Many of the girls worked with the Gemma microcontroller, developed by STEM Innovator Limor Fried, to create wearable electronics that solved real problems they had like a hat that reminded them to put on sunblock or a purse that lit up on the inside when opened in a dark space.

Lora Hine adds, “Research shows that childhood interest in science, not performance in science, has been shown to be a greater predictor of choosing to concentrate in STEM as a career (Maltese and Tai, 2011).  The more we can do to positively influence a girl’s perception of what it means to ‘do’ science or to be a scientist, the more likely she will be to pursue science-related activities inside and outside of school time.”

The experience was great for the GERLS but also for the female mentors. Says Jennifer Westling, “I’d just like to show my appreciation to XRAISE and the Ithaca Generator for making these opportunities available, not just for the girls, but for women like myself, to share our passions with the next generation!”

To see more of our work encouraging Youth in STEM, come to the Maker Expo at Tompkins County Public Library on Saturday 23 August from 11am-1pm.