Skip to content
NOTE: If you are able to read and listen to music at the same time — I cannot — then I suggest playing this video while you read. The music is quite good.

We gave our SxSW panel on women in open source [in March 2012]. It was fun. I’ve really enjoyed talking with Red Hat designer, Mo Duffy, these past few days and Andrea Hickerson is always a pleasure to work with.

Our panel was about encouraging women to participate in open source and open collaboration projects. By ‘open collaboration’ I mean any project that isn’t directly regulated by the market or government but instead relies on a group of self-organized volunteers. Yochai Benkler writes about this at a very high level, but I’m looking for something a little simpler. Also I’m not as interested in how the work is arranged, which is what Benkler articulates well, but how the entry experience for a newbie is designed.

During the discussion, I think we all agreed that when a host of an open source or open collaboration project extends an invitation for newbies to join, that invitation isn’t enough to encourage a diverse group of people to participate. We articulated that problem well, I think, and the audience nodded their heads in agreement. But solutions are hard to come by. Several audience members scratched their heads and asked, “Why is this still an issue?” To which I humbly replied, “I don’t know. That’s what I’m here to find out.”

One answer I thought of during the panel comes from what I’m learning in my grad strategy course. In strategy, we learn that it’s common for an organization to articulate a grand vision yet not clarify an execution plan to achieve that vision. “Why is that so common?” you may ask. Again, I don’t know but I suspect it’s because executing a vision is freaking hard to do.

So in trying to figure out how to add some walk to our talk, how to offer some actionable steps toward getting closer to the vision of more women participating in open collaboration, I called on my first love, music. In music, we engage in something called “Call and response.” The caller can be thought of, in this instance, as the host of a collaborative project. And the responders are potential participants.

Here are the steps for engaging people in a “call and response” collaboration.
1. Offer them an invitation to collaborate (good start, but not enough)
2. Show them how to participate (sing a simple line of a song)
3. Practice the line with them (until they feel comfortable)
4. Take a leap of faith together and sing the song

Now, I know the skeptics out there have been burned by engaging in a process like this. More than once I’ve heard a host of a project say, “I spent 10 hours training that person and they just abandoned the project.” This is a valid concern. That’s why it’s so important to find an easy task for the newbie to learn that won’t take too much of your time. Now, the other skeptics are saying, “Well, if I spend that much time with a newbie, won’t I just be training them to depend on me to lead them? That’s not what open source is about.” This too is a valid concern. To come back to music, a newbie starts off with an instructor, but eventually learns how to play on her own.

This is how you scale participation in open collaborative projects: extend an invitation to a newbie; model for them how to participate; practice with the newbie until she feels comfortable; then, most importantly, take a leap of faith together and sing that song. And when you get really good at this process, you may end up as good as Miles.

I just finished teaching a toy design course at Ithaca Youth Bureau. The class was small, just three boys, so I decided to teach it as an open studio. We started off with a discussion on “What is Good Design?” From there I gave the boys materials and they started making stuff. Several times throughout the course I would ask them, “What are you working on?” And more often than not their response was, “I don’t know.” I love this response. They were so willing to just play and see where that took them. I begged them, “Please don’t forget how to work this way. School will try to beat it out of you but don’t let that happen.” They looked at me like I was a little looney, then went right back to work.

At times they would get stuck with something they were working on and I was there to help them trouble shoot. For example, they were making axels for cars with BBQ skewers, paper straws, and plastic milk bottle caps for wheels. One day one of the students was working with honey bottle caps instead of milk caps and the honey caps had large holes in the centers. The student said, “I don’t know what to do. The holes are too large for the skewers.” But just the day before this student had been experimenting with making bundles of skewers. I pointed to his experiment and asked, “Would something like this work?” He said, ” I think they will.” Then a minute later he said, “The bundled skewers are too big for the straws.”  I pointed to some card stock and tape and said, “Could you make a wide straw with these materials?” I showed him how to work with the grain of the paper and a few minutes later he had a working axel for the honey caps.

On the last day of the class this same student said, “I think next time we could make all of these toys in one  week instead of two.” I smiled and told him that that was a good idea. But I wonder if he’s right or if it’s just that he now has the confidence to make a lot of toys in a short amount of time. Either way, I’m glad he wants to make more toys!

I made this funny little diagram of my design process today for a d.school MOOC I’m enrolled in. The prompt they gave for the diagram was something like “You’ve been hired to redesign the lockers at a school – describe your process.” My design process is human centered so I start with trying to identify and empathize with all of the stakeholders invested in “the locker problem.” Then I would focus on end users, students, to co-create the design with.

What I didn’t include in the process was deep dive into affordances. “What do lockers afford?” Privacy, storage, identity, place. Once you go there, you may end up with something that isn’t a locker at all.

Damn. I need to redo this diagram. #DesignIsNeverDone

I’ve been trying to learn about games lately and talking to folks who are game designers or serious players. Last night I told a game designer that I want to create a game that rewards creative risk-taking. This designer responded, “It would be best if you let the players define risk.” That was deep!

Another challenge is that different players have different tolerances for descriptive instruction. In design school, we graduate students once had a project in which our professor directed us to design something with “A Sense of Garden.” That was it. No further instruction. The project ran for 15 weeks! But my fellow students and I rolled with it, because design students are asked to do this kind of thing over and over until it becomes second nature. However, it’s hard for me to imagine engineering students being happy with this kind of instruction.

Which makes perfect sense. Engineers design bridges and if a bridge fails, the consequences are pretty drastic. People die and get hurt and the engineer may lose her  job or worse.

But do risk-averse people have to be risk-averse in every situation? Are some risk-averse folks irrationally projecting their fear of failure onto every decision they are faced with? If so, how might a game help them?

Perhaps, in addition to a player being able to see where her personality falls on a “prescriptive-descriptive” spectrum, I think there also has to be a way to see where the risk of specific situations fall. There are situations in which taking risks are okay even if you are a person who doesn’t like risk, such as in brainstorming. The outcome of a brainstorm is ideas. Most of the ideas go nowhere, so we might as well take a risk and come up with some crazy ideas. Brainstorming is a situation in which taking risks yields better results.

The game designer’s suggestion is probably right, I need to let the player create their own definition of risk. However, I feel that I should  design something that helps players create that definition. The definition will have two parts. One definition for their personal tolerance for risk; the other definition tied to specific situations.

What do you think? 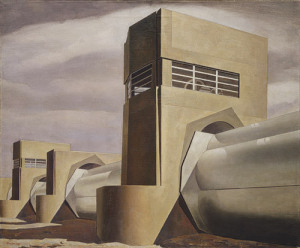 I’ve been thinking a lot lately about the cascade effects of mass production.  The unintended consequences that happen when you mass produce and distribute stuff. Some artists capture this theme extremely well. Charles Sheeler, whose painting titled “Water” is pictured above, was commissioned to paint American factories in the early 20th century. His paintings position the buildings like cathedrals or, in this case, natural elements. They are beautiful to look at and terrifying to think about. (Water?? Really??)

A contemporary photographer, Ed Burtynsky, photographs landscapes that have been altered by industrialization. His images of mined quarries, for example, are beautiful in their geometry but terrifying when you stop and think about the hyper-consumption that created that geometry.

Another example of this aesthetic, from music, is the work of composer Steve Reich who is known for his work with phasing. He plays small units of melody in synch and then slowly, over time, moves the units out of phase. The results are neat and mechanical even as the pieces start to come apart. The whole effect of his work is a beautiful terror.

Which makes me think of this phrase from The Declaration of Independence (today is July 3):

All experience hath shewn that mankind are more disposed to suffer, while evils are sufferable than to right themselves by abolishing the forms to which they are accustomed.

This “beautiful-terrible” aesthetic that so many of us in the 21st century are accustomed to is an aesthetic that highlights “out of phase” and our willingness to suffer through it. Our industrial systems are beautiful in their efficiencies and tolerable in their familiarity but are wildly out of phase in the negative social and environmental impacts they create. Yet we continue to embrace an aesthetic that says, “It’s complicated. Just go with it.”

What I wonder is, what aesthetic will push us to free ourselves from this beauty-terror trance that we’re in?